Writers’ Block isn’t real! There, I’ve said it. I know, madness, right? But no, it’s true, writers’ block doesn’t exist and here’s why. 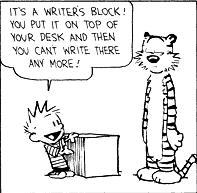 Writers’ block is a myth perpetuated by writers who have run out of things to say, whose idea doesn’t have legs or who haven’t prepared their screenplay/novel outline properly. “Oh no, I’ve hit a wall on page 30!” That’s because you didn’t plan your beat outline, sometimes called a scene by scene, well enough, not because you’ve hit an actual wall. You should really only run into problems if your planning is lacking and your idea is poorly thought out.

There are also times when your motivation will be low and you find yourself struggling to put words on the page even with a beat outline, but there will never be a point in your career when you simply go blank and can’t write anything. There is ALWAYS something you can be getting on with even if that means going back and reworking your beat outline.

Here are a few tips to help avoid the brick wall and keep those words flowing even during moments of low motivation.

As I’ve said above, if you run into a brick wall it’s usually because your planning, that extensive beat outline, isn’t as well planned as you originally thought. There’s no shame in admitting it and it might even help to stop writing and go back to your beat outline and rework it some more.
The most important thing to remember is not to put pressure on yourself. Put the words on the page and then rework them later so they make sense. Keep the words flowing even if you have to come at your project from a different angle to make it work.
Happy writing!